I would love to say that raising a baby gets easier on week 2&3, but unfortunately it’s been just as hard (if not harder!) than week 1 for us. I think part of it is the lack of sleep is catching up with us in addition to experiencing new struggles. Tyler and I have jokingly admitted to each other that we’ve often forgotten what day of the week it is, which is why i’ve combined these two weeks because all of the events are literally starting to run together!

Cache has had a tough time this week with a lot of crying – more-so than last week. Sometimes, we’re up at all hours of the night finding ways to relieve him. Other nights aren’t as bad. We didn’t seem to have a problem with this during week 1, so this was a little frazzling for us! We ended up texting our parent-friends about our situation assuming he had gas, and our friends so kindly dropped of Gripe Water and Windi The Gasspasser for us. We haven’t tried the Gripe Water yet, but we are new fans of Windi! If you have a baby struggling with gas, I would highly recommend ordering a box (they are disposable and you don’t reuse them). Lubricate the stick on the end for easy insertion, and you’ll hear air come out of the other end if baby is gassy. Beware: using these made our baby poop e.v.e.r.y.w.h.e.r.e. during the process, and we were cleaning up poop for 20 minutes after (on doors, baseboards, floors, walls…you get the drill)! It’s best to put a paper towel on the end of the Windi!

We got Cache’s social security card in the mail this week. Our man is officially on the map! (FYI: you don’t have to sign the card. You can leave it blank and store it in a safe place until he can sign it. I made the mistake of signing my name on his card so I might have to ask for a new one, but I also read that doing this doesn’t invalidate the card).

One positive thing that has happened for us this week is that Cache is not feeding as often as week 1. Like I said in my week 1 blog post, breastfeeding during the Colostrum phase is SO difficult. It’s hard to see how much the baby is eating, and I feel like it takes more work for the baby to get the colostrum out. When the milk phase kicks in, there are signs he’s getting enough milk: you’ll see the milk filling up the outer edges of his mouth, he’ll take big gulps and pause to breathe, you can look at his diaper output and your breasts become extremely soft after feeds. During week 1, we were feeding every 2 hours. Now, we’re feeding every 3 hours, or 3 feedings a night (12 AM, 3 AM, 6 AM).

Cache’s umbilical cord fell off on Day 10 of this week. It makes diaper changes not as difficult which is nice. Before, we had to fold down the diaper so that it didn’t cover the belly button. Now, we can put his diapers on like regular diapers!

I have no problem admitting that I’ve grown frustrated with the baby this week. A lot of people talked us out of giving him a pacifier to avoid nipple confusion. After our pediatrician gave us the go ahead, we decided to introduce him to one to give my nipple a break! He is not really a fan of pacifiers and prefers to use the breast for soothing. My pediatrician said this is because babies know the difference between skin and plastic. With pacifiers, he spits them out (definitely zero nipple confusion). Because of this, I’m forced to use my nipple to soothe him throughout the day, sometimes every hour. If I don’t, I have no doubt that he’d cry until I caved! It’s been tiring. However, we did find a paci that he somewhat likes. We started with a Soothie and that was a no-go. We ran to Target to find another option and found the Nuk. As of right now, he prefers that over the Soothie. Don’t hesitate to try out different pacifiers for your baby. All babies are different!

Another frustration this week is that it takes sooooooooo much patience to change his diaper throughout the night. He’s a squirmer/kicker and absolutely loathes diaper changes, so putting a diaper on him at 2 AM is not my idea of a good time.

Our second pediatrician appointment was this week. Our homework from our first pediatric visit was to begin tummy time, give him Vitamin D drops, and get him back up to his birth weight. As a breastfeeding mom, you can’t help but feel responsible for his weight loss even though it’s common in the first week. I had a lot of anxiety leading up to this appointment for fear that he’d be at the same weight, and I’d have to switch to formula. When they placed him on the scale, the numbers jumped to 8 pounds, 9 ounces. WE DID IT! He gained 1 pound and 6 ounces from the last visit! I was beaming. This was music to my ears!!!

Our pediatrician warned us at our first appointment that the new-parents-giddiness would wear off and sleep deprivation would hit us soon. This appointment was total proof. We were completely drained, and she could totally tell! During our first visit, we didn’t have a lot of questions. This second visit came with a whole notepad of concerns. It’s so funny how in just one week, you begin to experience new problems that come with parenting. We asked her questions about eye drainage, rashes, spit up, bath time and if he could go to the beach with us if we dressed him appropriately (SPF 50 rash guard, hat, etc.) It was really helpful to express our concerns to her so that we could rest easy at night. During this visit, they also measured him and put together a growth chart. This growth chart helps track his progress and also puts him into percentiles, for example: his head size is in the 90th percentile, which means the size of his head is above average. Before he was even born, we knew he would have a large head (like his dad 😉 )

I began pumping this week. I actually enjoy it. It gives Tyler time to feed Cache (which he loves doing) and gives me a break. If I choose not to breastfeed him at his feeding times (6 AM, 9 AM, 12 PM, 3 PM, 6 PM, 9 PM, 12 AM, 3 AM, and so on and so forth), I’ll pump instead. I was able to get in a 3 hour nap the other day because of pumping! It was so, so nice. I also had a crack in my left nipple, and pumping has allowed me to give it time to heal. Breastfeeding this week has been pain free and so enjoyable – thanks, Medela!

Week 2 and 3 mainly comes down to one giant issue: Cache seemed colicky. I read that a colicky baby cries more than 3 hours out of the day, and Cache definitely fit that criteria! But after a lot of research and taking mental notes on what upset him and what didn’t, we realized this wasn’t because of gas. I’m truly embarrassed to say it, but we weren’t putting him on any type of schedule. We were feeding him on demand, and if he wanted to fall asleep in his rocker or during tummy time in the middle of the living room, we let him. We didn’t have a nap routine, and I think this was messing him up. We finally resorted to Moms on Call, a book (and an app) that help provide a schedule for your baby based on his age. I love the app because it notifies you when it’s time to feed him. It also maps out his nap times based on his age. 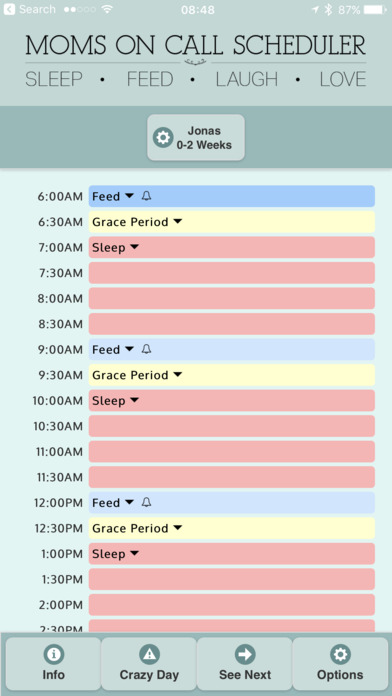 Since sticking to a schedule, he’s been WAY less fussy! Seriously though – I’m SO embarrassed that we didn’t know babies needed designated nap times and more importantly, nap spaces! We had our night time routine down to a science… but during the day, we didn’t know that he should be swaddled, white noise, crib, etc. I’ll be honest when I say that we literally have no idea what we’re doing and we’re learning as we go. There is no parenting manual! You just have to trust your gut, research, ask advice and figure out what works best for your baby’s personality.

All in all, this week was a hard week. A really hard week. A “why do people think this is fun” week. It came with a lot of learning, grace and patience. If I have any advice for my expectant mama friends, it’s this: ASK FOR HELP. It really does take a village to raise a kid. Tyler’s family came into town and stayed with us for 2 nights, and it literally couldn’t have been better timing. I NEEDED them: for a lending ear; for advice; for down time while they watched the baby. Tyler and I actually got out of the house this week for “date night” (we went down the street to a cupcakery), and although our date only lasted for about 45 minutes because we were so exhausted, it was so worth it and gave us a moment of silence to talk about life and make sure the other was doing OK.